Eight local artists, inspired by the poignancy and beauty of a derelict psychiatric hospital and former workhouse , transform St Clement’s Hospital, Bow – soon to be the first urban community land trust in the UK –  into a vibrant celebration of compulsive behavior exploring  childhood, mutability and society’s perception of normality.

COMPULSION, curated by artist Miranda Housden, presents a series of site-specific installations which respond to the palpable tensions in the abandoned rooms.

The transformation of this historic building formed part of  the  summer 2013  Shuffle Festival, which included theatre, poetry readings, and films curated by director and local resident, Danny Boyle.

Susan Aldworth is represented by GV Art, London and currently has The Portrait Anatomised on display at the National Portrait Gallery, London. Her films and prints investigate human identity by exploring the relationship between the physical brain and our sense of self. How is consciousness conjured from the 3 pounds of jellied flesh of the brain? What turns matter into imagination? http://susanaldworth.com/

Artist Silke Dettmers, whose studio is situated in the Bow Arts Trust, examines the use of manufactured objects or their re-making in a foreign material or scale enjoying the creation of paradoxes and disruption of known meanings. http://www.axisweb.org/seCVWK.aspx?ARTISTID=3690

Tessa Garland, also from Bow Arts, explores scale, illusion and theatre in Above the Skyline, a video work made around an elaborate miniature construction, an outcrop or deserted set, strewn with detritus. The obsessively collected and subsequently discarded objects form the narrative heightens the paranoia and sense of isolation. http://www.tessagarland.com/

Kerry Lawrence’s delicate drawing Take me Home transforms the cell like Turret of Saint Clement’s into a crystaline lace haven made from Windolene. The toxic pink liquid is re-worked into threads of lace, paying homage to the painstaking craft which women and children were engaged in during their time in the Victorian workhouses. Take me Home refers to a longing to return – words taken from Lawrence’s relative who was once a patient at St Clement’s – it expresses the desire for healing and coming home.

Susie MacMurray, represented by Gina Agnew Contemporary Art, is a former professional classical musician who retrained as an artist. She sees her role as alchemist: combining material, form and context in deceptively simple ways to stimulate associations within the viewers’ minds and to elicit nuanced meanings. http://www.susie-macmurray.co.uk/

Jo Stockham, based at Chisenhale Studios, is Professor of Printmaking and Head of Department, Royal College of Art London.  Often in non-gallery environments, she explores the relationship between digital technologies and older forms of print technology, and is interested in time, history and the way in which technology creates the means and metaphors with which we communicate. http://chisenhale.co.uk/chisenhale/studios/jo-stockham/

Amikam Toren, represented by Anthony Reynolds Gallery, is also based at Chisenhale Studios. His sculpture Stacks is derived from a variety of images printed on cardboard boxes as warning signs and or instructions to the handler. It is a primitive and effective international language, translated into objects / sculpture magnifying its meaning. http://www.anthonyreynolds.com/toren.php

ELCLT exists to deliver permanently affordable housing in east London, ensuring that people are no longer priced out of the neighbourhoods they grew up in. Born out of the community organising efforts of Citizens UK, ELCLT not only actively engages as many local people as possible, but is set up by, owned by and run by the people of East London.  For further information see www.eastlondonclt.co.uk/

St Clements was built as a workhouse in 1848/9, where those that were unable to support themselves were offered accommodation and unpaid employment. The building opened in 1849 as the City of London Union Workhouse. In 1874, while remaining the property of the same Union, it was converted into an infirmary used for examination and assessment of patients’ mental health before being sent to other institutions or being discharged. When the Homerton Workhouse reopened in 1909, the infirmary became superfluous and was closed. However, it was reopened in 1912 as the City of London Institution to treat the chronically ill. By 1959 the Hospital had become exclusively psychiatric. It became part of the London Hospital Group in 1968 and was then called the London Hospital (St Clement’s). From 1968 to 2003 it remained a mental health facility until the East London and The City Mental Health NHS Trust decided to sell the site for redevelopment. It has been closed since 2007. 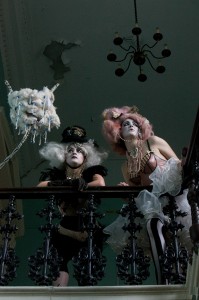 Compulsion exhibition: Interviews with the artists